Back in November I met a Yellow Lab named Sam from Villa Park. Sam was 14 years old and in good shape despite two back legs that would occasionally give out due to arthritis. His parents were planning a trip to Hawaii for two weeks in February and needed someone to take awesome care of him while they were away.

Months went by and it was finally time for the first visit. Everything went just right! He ate all his food and snacks, we went on a short walk and he even grabbed his tennis ball for a short romp. Two days pass of perfection and then Mother Nature decided to step in with the third biggest snow storm in Chicago’s history. As the storm was approaching, I was getting scared and nervous. I knew no matter what, I had to get to Sam for his last visit of the night at 9:30pm, which was when meteorologists were predicting the storm would be at its worst.

As I was driving to Sam’s that night, the wind was so strong it was blowing a speed limit sign back and forth like I had seen during the coverage of Hurricane Katrina. I hit blackout conditions, skidded down the road and at one point almost got stuck in the snow. A drive that should have taken me ten minutes, took about 45 minutes but I got there safe and sound. I opened the door and there was Sam, sleeping on his bed. Sam had no idea the craziness that was going on outside until I opened the door to let him out for his last potty break. He looked outside, looked at me, turned around and went back to his bed!

I wasn’t mad at him for not going outside. I would not have gone outside either if it was not for Sam. The funny thing is after the storm was over, I was happy I left my house. I can say I really experienced one of the biggest storms in Chicago’s history. It was an adventure and a night I will never forget. I will also never forget my two weeks caring for sweet Sam. 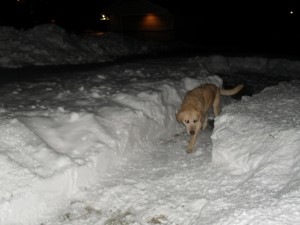