I’m in charge of: Providing much needed relief, fresh air, and endless love, plus long walks along the shore of Sloan’s Lake and around the Highlands ‘hood.

Hidden Talent: Wicked Dance Moves, and due to my past life as a dog, I would be perfectly content sleeping all day, receiving a head massage, eating, and taking a few walks a day. I understand pups’ every want and need…The Dog Whisperer if you will…

Life Philosophy: I love life and love livin’ it. Smile at everyone you come across or that chooses to acknowledge and/or make eye contact with you. Happiness or sadness is contagious! Open your arms and home to a dog…truly the best friend you will ever have.

Super Power: The ability to snap my fingers and produce enough money to own and operate a dog rescue and find homes and loving families for all the homeless pets throughout the world!!!

I’m in charge of: Office Security & Quality Control Officer. Responsibilities include hourly perimeter checks in the office, checking out all smells, auditing treat supply, training sitters on head and butt scratching techniques, and sniffing down visitors.

My furry family: I live with a bunch of girls who drive me crazy! One of my sisters is an Australian Cattle dog mix who’s always stealing my bed and another sister is a fat orange kitty who never wants to play or share food.

Super power: If you could have one super power what would it be? The ability to leap tall buildings (I am a Great Pyrenees after all…).

Best Thing Ever: Snow!! I love everything about the snow-it holds a ton of good smells, it’s delicious and refreshing, it is the best to roll around in, and I blend into it so well!

Hidden Talent: I can’t wait for my solo backpacking trip this summer to the south of France! I’ll start in Pau and make my way to Cauterets in 7 days with hikes exploring exquisite lakes, shepherds’ huts, and rugged glacier-carved scenery. And I’m totally excited for all of the cheese too!!

Life Philosophy: I believe in the power of long, thoughtful walks, the breeze in your fur, and other simple pleasures like rolling in the grass. Life should be full of treats, snuggles, and belly rubs!

Super power: Teleportation-growing up watching Star Trek, who could blame me?!

Best Thing Ever: My favorite thing is walking around Sloan’s Lake with my pups on a sunny winter afternoon.

Hidden Talent: My hidden talent is recipe mash-ups. Ever take a vanilla bean cake, add layers of lemon cheesecake, top it with lemon curd, and frost the sides with a whipped cream frosting? Killer combo!

Life Philosophy: My life philosophy is to share as much kindness, humor, love, and food as you possibly can every day!

Gabe is awesome at dog walking and cat sitting in Colorado! Get to know a little more about Gabe.

I’m in charge of: Canine posterior oscillation… I make sure tails are wagging.

My super power would be: The ability to always pull exact change from my pocket.

After a lot of careful planning, Out-U-Go! Denver Pet Care recently relocated to an awesome, freshly remodeled office space. Located between 2nd and 3rd on Broadway in Denver, our new space is huge, bright, colorful, and awesome! 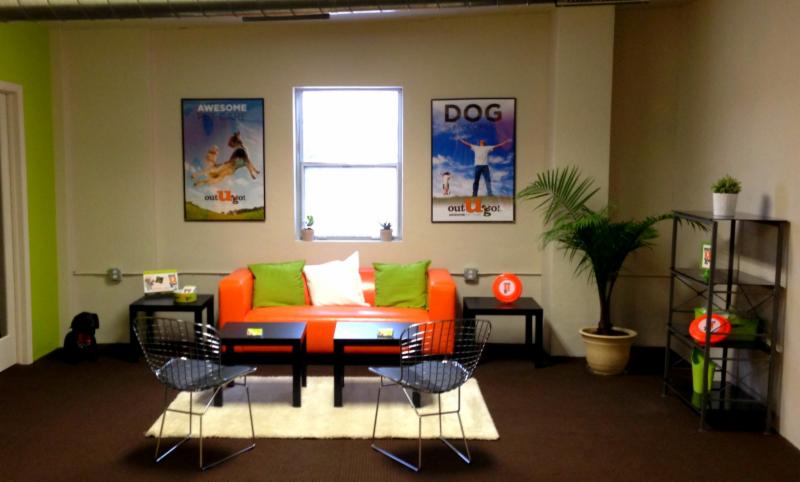 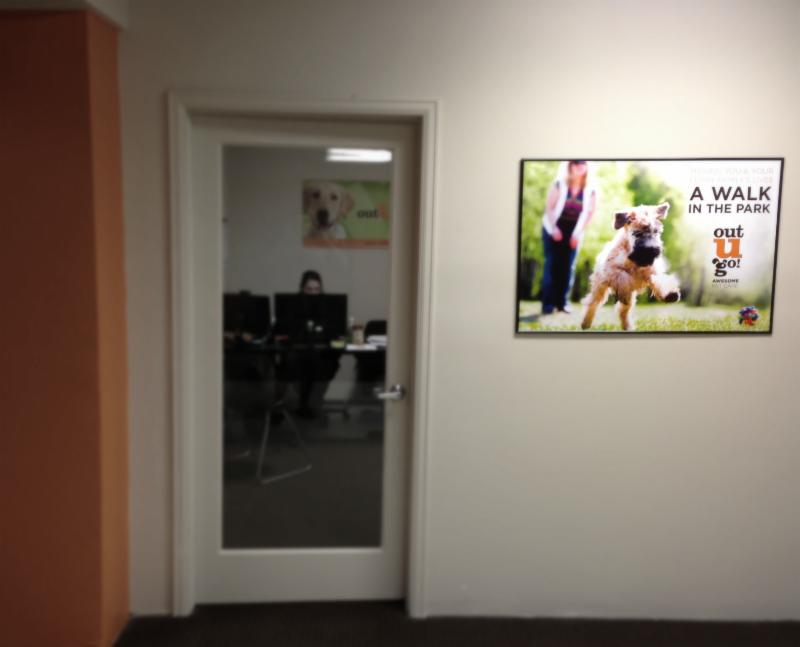 Look out for the OUG! sign on Broadway and stop by to say hello. The new office makes for a great work space so we can continue to provide awesome pet care to all our furry friends around town. 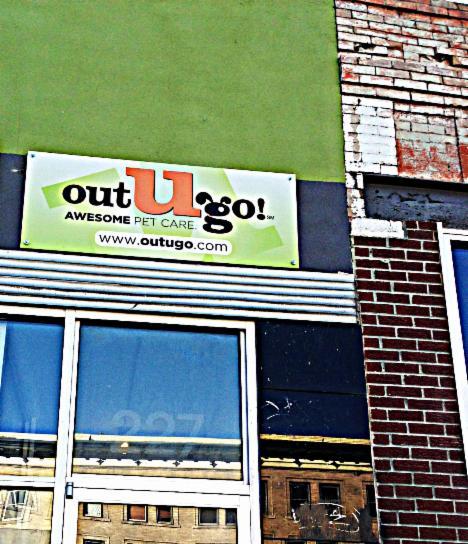 I’m in charge of: Hanging out with my furry friends!! I’m also on poop patrol and clean up after the fur-kids I care for. I take care of kitties, doggies, and other furry friends!

My furry family: At home, my furry family is ruled by Freya, a very fat but incredibly lovable orange tabby cat. Really it’s her house, and she just allows me to live there since I provide the food.

Super power: Teleportation! I could get places so much faster, and I could visit more four-legged friends in a day!

Best thing ever: Teaching. Even if it’s something simple, it’s nice to pass something on.

Hidden talent: I am actually really good at gardening. I have a whole garden on my apartment balcony with herbs and plants that I’ve set up and taken care of.

Life philosophy: I strive to live every day as the best possible version of myself.

For more info about the Out-U-Go! office staff & our furry families, paw through these spiffy new Boulder and Denver staff profiles!

I’m in charge of: Taking care of, loving, and exercising pets while their human moms & dads are away. I specialize in belly rubs and treat each pet as lovingly as I do my own.

My furry family: I have an adorable, hilarious, and often head-strong female Basenji named Kevin (yes, I said female). She enriches my life on a daily basis!

Super power: I would love it if pets could speak English to me so we could hold conversations while we spent time together. As of now, they are just stuck listening to their dog walker all day.

Best thing ever: Having a job doing what I love. Spending time with pets all day, dog walking and cat sitting, is honestly my dream job.

Hidden talent: Writing. I am, in fact, currently working on my memoir.

Life philosophy: I try to live my life like a dog. Be myself no matter who’s looking, live in the moment, and love others like they’re never coming back.

I’m in charge of: Pampering pups and cuddling kitties.

Super power: To make it sunny outside for all your doggies’ walks!

Best Thing Ever: Having pets!!

Life Philosophy: Always be succesful and never give up.

My furry family: Santiago the Cat, Mariachi the Cat, Tequilla the Guinea Pig, Diablo the Iguana, Agave the Bearded Dragon, and Fishy The Fish.

Finding great, scenic dog walking routes in Denver is something we’re always sniffing around for. While Sherlock’s nose is to the ground (searching for squirrel clues, of course!), it’s a treat for parents to take in such sights as unique architecture, local history, or beautiful natural landscapes. Our paws have done some walkin’, so we’ve compiled a list of our favorite routes across town for you and your pups to check out!

Out-U-Go! staff meetings typically involve bagels, coffee, orders of business and staff members sharing  some of their experiences working at Out-U-Go!  It usually becomes clear that some of our Pet Parents’ homes produce more stories than others and at a recent meeting, one particular household of dogs proved to have A LOT of stories (mostly about poop).  Of those stories, one sticks out in particular…

To protect their anonymity, let’s refer to the dogs as Penny and Gretta G.  Now, Penny and Gretta share a special flare for life as well as anything and everything edible and not edible.  As such, it’s not uncommon for them to crap on the floor… but hey, even the best of us have the occasional accident.

Like most dogs, these two shed a lot so their owner purchased a Roomba to keep the hardwood floors clean while he’s at work.  If you don’t know, a Roomba is a Frisbee sized robot vacuum designed to roam the house cleaning the floor while you’re at work.  Between a mid day visit for the dogs from Out-U-Go! and a hard working Roomba, this Pet Parent had a lot to look forward to every time he opened his door after a hard day at work.

One day, like all days, Penny and Gretta’s owner kissed his two beautiful dogs goodbye, released the Roomba to do its thing and drove off to work.  A few hours later our walker arrived to find a house full of diarrhea and a hard working Roomba.

As it turns out, the standard Roomba is not equipped to clean a house full of diarhea, but not due to any lack of effort.  By following the parallel diarrhea tracks around the living room and noting the skid marks of partially-dry diarrhea with wheel tracks through them, our walker could clearly see the Roomba’s morning long effort to vacuum up diarrhea.  Because the Roomba has a sensor that determines whether an area is clean or whether it needs more vacuuming, it diligently attempted to clean several areas with back and forth motions until the sensor read clean.  Had the Roomba been mounted on a WWI tank it might have had a chance, but alas, the standard model uses plastic wheels and the sensor never read clean so back and forth it went.  Despite giving it the old college try, our walker wasn’t able to get the floor completely clean, just like the Roomba.

Upon hearing of this incident, our office staff picked up the phone and called this Pet Parent at work to inform him of what happened.  He responded with mostly curse words.  Penny and Gretta bounced back fairly quickly and were ready for their mid-day walk the very next day.  The Roomba, however, was never the same.