Before I describe my epic struggle to be accepted by the wild roaming pack of Bulldogs, I would like to make a couple of observations about the dog-walking business from my 3 or so months on the job.

Dog walkers are kind of like ninjas.  Quickly and confidently, we enter people’s homes and efficiently carry out our missions, disappearing suddenly into a cloud of smoke.  Actually we’re not like ninjas.  But we are like Vikings.  We come in the morning mist and our fervid throaty yells proclaim to our victims that we come to claim all that we do not destroy and bring it back to Norway and okay I guess were not like Vikings either.  Let’s suppose we’re like teachers.  We take care of your little ones for a while and then we give you a report card mostly just confirming what you already know and love about them, having ourselves no mandate to controvert or supplant you or your style of pet parenting. The little ones may love us intensely, but at the end of the day we are just the minor supporting cast in the furry one’s life.  A supporting cast of Viking, ninja, teachers are we.  And not dog trainers.

If I see a dog everyday and have never met their owner and have no notion of how the owner interacts with the dog (cuddly gushing indulgent, strict disciplinarian, laissez fair individualists, etc), I have to sort of go with it.  Of course there are often lots of great Out-U-Go! and parent notes available, but where info is not explicit, there are always clues.  If a dog walks always on the right, then that is probably how he or she has been raised.  I have no business meddling and confusing things, even if every other dog I see that day walks strictly on the left.  Dogs are creatures of tremendous adaptability, but the other side of that coin is a powerful tendency to habituate to the patterns and rhythms of their home environment.  Strange and unconventional though these may be; it’s not for me to judge.

Jackson and Poncho, for example, are two large dogs that almost always walk the exact same route.  I know that route because if I try to take another one, Jackson the Great Dane mix will stare at me with what looks like canine horror and then pull and pull until we’re back on track.  Magglio and MJ are used to having their treats tossed to them, which is the only way I think their owners can continue to have hands, since I nearly lost mine the first time I met them.  Dudley is used to getting a treat right after his walk, and if I delay there will be a small lake of drool for me to clean up.  I enter and conform to a hundred such customs every day, like a mad anthropologist with a combination teleporter/espresso maker.  At every visit, the dogs reveal the boundaries and engrained behaviors that best join them with their owner’s happiness.  Like ninjas, our hand is best invisible.  Like Vikings, we do not come to teach or preach.  Like teachers, we can always gather together at recess and share some good natured eye-rolling, and then bite our tongues and go back to the little ones that we care for.

Yet dog walkers must have boundaries too.  Not being bitten is always nice, but I’m talking about subtler stuff.  For example, whether or not a dog is used to stopping and sitting at intersections when walking with his owner, the pooch is going to at least stop when we have to cross a street where there are cars, and wait for me to determine the best time to cross.  Not negotiable, sorry pup.  Likewise is no dog allowed to stop in the middle of a street to smell something or have a good scratch.  I’m sure that’s really important business on the dogs agenda (probably the only business on the agenda in fact) but as a human with a car, I understand the risk of other humans with cars, and thus I’m really better qualified to take charge at that moment.

Sally is not allowed to chew on the neighbor’s Chihuahua no matter how much she wants to.  Homer is not allowed to eat snow that gives him bladder infections.  Abigale is not allowed to roll her nice fluffy white coat in the mud.  Morgan and Barley aren’t allowed to try and climb me like mountaineers, since they always either scratch my face, rip my clothes, or kick me in the groin.  Tsuki isn’t allowed to sniff the same spot for more than 30 seconds, because it’s a 20 minute visit, we’ve got to walk at least 100 feet to the corner, and I know for a fact that there is another equally thrilling smell just two feet ahead.  Give a ninja a break. 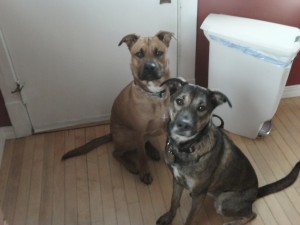 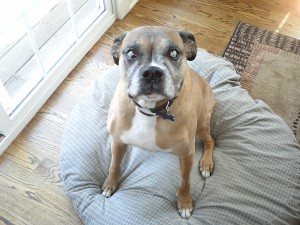 Dudley - treats first, or sop up the drool!

And Buddi, oh Buddi.  Buddi is not allowed to destroy his leash.  He is not allowed to take up half of every visit chomping on to his choke chain (I conform to the equipment too) and clinging to it like it was all that he had ever loved, or truly hated.  Either way,  it’s my job to walk you, and I’m gonna.  I never set out to teach Buddi that tug-of-war was bad, cause he must do a lot of it with his owner.  Might as well tell a bird to quit all that fooling around the sky and get to marching.

But tug-of-war with your leash every day before I can even get it on you, that means no time for walking, for him or his brother, Orecchio.  It has to stop, and I have no time to correct behavior.  The clock is ticking, so I go against my better dog-raising instinct and accept the declaration of (tug-of) war.  For a person who is trying to fit comfortably into a new social hierarchy while maintaining at least nominal delegated authority, tug-of-war is risky.  You don’t want to encourage fighting, you don’t want to be seen as on the dog’s level, and most of all, you do not want to lose.  This last maxim was echoing in my head as I tried to remove the collar from the mouth of the truculent 50-pound lock-jawed beast that was bred to bring down bulls.  In total darkness.  That story next time.