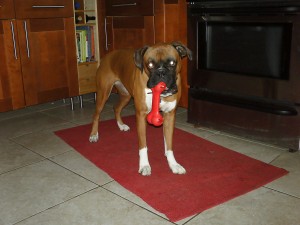 Mattie is a gorgeous little reddish Boxer who walks like no other dog.  She hardly sniffs a thing, and only wants to go forward, fast, and now.  She could not attract more admiring attention if she were a fine colorful Victorian lady gliding down the street under a parasol, and like such a lady, she is most particular about where she evacuates.  It is important that Mattie goes because if she comes home still loaded, she has to be crated instead of free run of the home.  Even if it takes extra-long and we have to walk all the way to Indiana, I am resolved to not be satisfied until she is.

This is why it’s always very exciting when the great moment arrives.  You can tell it’s impending when she lowers her head to actually consider the ground as we walk.  Then as we approach the drop zone, she begins to swing her body back and forth in ever-tighter turns, just like a fish swimming up stream, if that fish were also a belly dancer playing hopscotch.  I stand back and enjoy the show, trying not to laugh (any disturbance could be fatal to the endeavor) as her turns get tighter and tighter and quicker and quicker until she is not actually moving around but rather just flailing like a possessed and very negative head-banging rock star.  Then comes the squat, which is more like a self-defense pose than anything, and then Mattie sheds about a quarter of her body weight.  But that’s not the best part.  The apex of this little ritual, the part that had me laughing like a mad man in the street the first time I saw it, is what she does with her legs. After all that twisting and dancing, all that kinetic energy needs somewhere to go, and so it shoots through her legs and discharges into the earth like lighting, as her hind legs thump up and down like the happiest of cartoon rabbits.  Then, lighter and leaner, she’s off again.

I feel privileged to witness this.  It’s what zoo keepers must feel like when baby Pandas are born.  Mattie’s creation is oh-so-much less cute than a baby Panda, but nonetheless receives prompt attention.  And this is the real advantage of having what is by now a preternatural ability to tell when a dog is getting ready to do his duty.  Before the pooch can begin kicking up earth, I have their rejected kibble bagged, tied and ready to toss. Dogs can somehow predict earthquakes, but I too can spot the tiniest shift indicating impending seismic movement in the seismometers themselves.  The 4th lumbar vertebra lifts about a half millimeter, the sniffing becomes 4-12% more assiduous, the path straightens out and The Poop Walk begins.  By this time, I’ve already got a bag open and ready.  A pair of figure skaters could not pick up each other’s poop with more speed and grace.

But there is a darker side to this ability?  The fact that I’m so proud of it is itself quite worrying.  Is the price I pay for my new talent…my sanity?   Could laughing like a madman as Mattie does her poop dance mean that I’m actually a madman? Is it wrong to be so emotionally invested in a dog’s baser functions?  There are little alarm bells in my head that chime even as I strut down the street chirping “Good Mattie!  Such a good little pooper!  And such a nice big poop!”  I’m afraid I’m over the hill.  Or the mound, as it were.  But I am a professional dammit, and no one can convince me that Mattie is not a good girl.  Dogs have such little responsibility, you can’t deny them their little glories.  I won’t be the parent that reproaches his 3rd grader for messing up his lines in the school play.  Yes it’s poop, and yes I’m losing it, but way to go Mattie.  I’m proud of you.