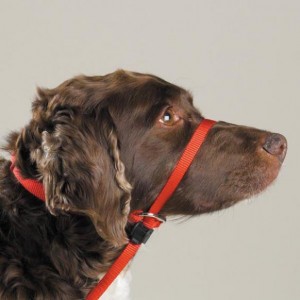 Gentle Leader!  Gentle Leader!  This is not only a Confucian ideal and a dream of the Arab Spring.  No, it’s also something far less important, if no less rare:  the perfect dog walking tool.  In over six months of walking dogs, I can honestly say I’ve used this magical implement exactly twice.  Both occasions were notable for the comfort and ease with which the dogs were gently led by me.  This is as you’d expect though, since the gentle leader is, in my professional opinion, the best thing on the market for people with dogs and arms who care about either.  I don’t mean to endorse the gentle leader product specifically–buy the counterfeit black market version, or make your own out of old shoe laces for all I care. You may find your pup reluctant to be bridled at first, but I think this is only partly because they’re uncomfortable (though surely no less comfortable than a collar with little prongs sticking into your doggy’s neck, the most popular method among my pup’s parents) and partly–mostly–because the dogs know that once that thing is on, their pulling and lunging days are over.  For as dogs, they intuitively understand the great fortune-cookie wisdom of the universe: control the head, and the body will follow.

Control the torso, however, and the dog will pull like a punctilious draft horse behind on his rounds.  Body harnesses are preferable to prong collars or choke chains in my book, but that’s only because I’m larger than the dogs I walk.  In some cases, like Annie and Abigale, both of whom wear harnesses and together weigh about as much as my shoe, the harness works well because if they pull and pull with all their adorable might toward an old pizza scrap or something, I can simply lift them up and set them down a foot away.  A crane operator couldn’t ask for a better cargo net.  In other cases, I’m only slightly larger than the dog, like Cooper the giant Goldendoodle.  Even in this case, the combo collar/harness gives me enough control to keep him from pulling me wherever he pleases, provided I center my chi, tie the leash to my belt and hug a street light.

But even then, the walker can still become the walked.  There is another important piece of equipment that connects to the thing that connects to the dog.  You guessed it:  the leash. And you guessed it: retractable leashes suck.  Most dog walkers agree and can’t get enough of talking about how they dislike them.  The flaws in the retractable leash approach are so myriad that I can’t even describe them all.

But let me try.

All of this happens every day, or would, if I were less of a pro. As it is, I get plenty of practice passing retractable leashes between hands (behind my back, over my head, between my legs, oh yes) every morning with Jackson and Poncho, two large energetic dogs who are used to dashing where they please.  Jackson, in particular, gets walked with out any leash at all by his owner (don’t get me started) and seems shocked every day to find that he can’t stray more than 30 feet from my side.  He’s lucky to get that far, ever.

Really, I like to give dogs as much leash as the environment and circumstances allow, and they’re obedient and mature enough to handle.  With some dogs unfortunately, this isn’t much.  Biscuit can have a lot of line unless we’re approaching a corner or alley or thing he shouldn’t get at. Dudley can have all the line he wants, because he’s old and doesn’t fight or chase anything (though he has been known to walk into trees and fences, poor guy).  Beau could have a lot of line because he always came when I called or pulled him in.  Poncho gets very little, because he wants to pursue and consume everything, even if it should happen to be beneath a moving car.  His retractable leash recently broke though (surprise!  I didn’t do it) and he’s been using a backup, normal leash.  Guess which I prefer?

I will say this for retractables:  dogs are less likely to step over them, and you can do the ratchet maneuver where you raise and lower your arm while stroking the flywheel (or whatever) with the cog by gently pressing the button, resulting in a loud ratchet sound which the pooch can hear and feel as small little pulses in the leash.  Dogs that are enjoying a good long sniff know that after the third ratchet, I’m pressing the button all the way and we’re off to find the next great smell.  It’s a pretty neat study in sensitization that most dogs I walk regularly don’t need to be pulled along much anymore; just the ratchet noise is enough to get them moving again.  It’s pretty gentle.

But not as gentle as the gentle leader!  That sweet face hugger is the gentlest leaderiest of all.  And it’s available for purchase at most major pet stores!  Wow!  Trust me, your dog won’t thank you.  At first.  And that’s a good thing.  But eventually he or she will catch on, and then when your neighbors see you and your dog floating down the street like Buddhas, they’ll go buy them too (or make them).  Then someday, maybe, I’ll gently lead a third dog. It’s my great trivial dream.