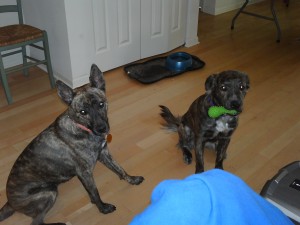 I know, it's hard to resist these cute faces!

One of the really terrible things about the Midwest is that people are so golly goshdern friendly.  If you pass ten people on the street, you’ll likely hear five “hellos,” a couple “how are you’s” and everyone else will smile and nod. (With the exception of one person who is either distracted, cranky or foreign.) It takes a little getting used to, but once you’ve caught on it becomes imperative to reciprocate every greeting, and even initiate those that aren’t forthcoming, even if it means risking the shock of saying “howdy” to the one oddball that doesn’t respond.  That shock is indeed terrible, but other than that, all the friendliness is really only terrible when you’re walking happy, adorable animals while maintaining the strict no-petting policy.

Out-U-Go! teaches their Pet Sitters to stay away from other dogs and humans……and squirrels and rabbits and cars and orangutans and ogres (the training is amazingly intensive). It’s a sound policy and an easy one to embrace for the sake of liability and plain ol’ good sense. The difficulty comes in explaining company policy quickly to a person who, already slightly crazed with Midwest friendliness, is bowled over by my pup’s cuteness and comes charging across the street to smear their hands all over my poor pooch.  These people can come out of nowhere and are surprisingly quick, and since brevity is not my strong suit, I have some special tricks to keep them at bay.

One of these is to pretend that the dog at my side is pulling really hard, and say things like, “Easy girl! Stay down!”  This will cause most prudent people to reconsider coming too close to a wild dog. A few of the dogs I walk seamlessly pick up on the subterfuge and start pulling, lunging and wiggling like crazy.  Lizzie is a good example of this.  In fact you could say that Lizzie is a dedicated method actress who has never broken character for a moment.

Still, it’s amazing how many people are not deterred by an over-excited canine. Sometimes I’ll say to this person, “careful, he’ll get his muddy paws all over you.” This will keep the dapper friendlies away, but still there are those who are not deterred, especially if there is obviously no mud around, or conversely if there is mud everywhere, including on the would-be love assaulter.  For these kinds of bogeys, I have a special weapon – blatant lying.  I’ll tell them to “Stay back!  He’s not too friendly” or “Careful now, she doesn’t like to be touched.” This second one isn’t always lying, seeing as most of these overzealous fur fiends think noogies and ear pulling is endearing to a dog.  Such people deserve a quick lesson from several dozen pearly white tutors.  But if I let them get that lesson, I’d deserve to get fired.

A few examples:  Annie and Abigale weigh about 15 pounds combined and are so impossibly cute you want to curl up in a ball and suck your thumb.  Such creatures need lots of protection from everything (including hawks) and I provide this in a pinch by telling people–in as serious a voice as I can muster–to “watch out, they’re killers.” It’s easier to deter would-be petters when you’re walking a dog that actually looks kind of scary.  In that case all I need to do is also look kind of mean, and the friendly folks naturally keep their distance.  Dudley’s somewhat demonic features, when combined with a scowl from me, can create a 100 ft buffer zone for us to stroll through, which is especially important now that school is out and feral children are everywhere.

Of course it’s nice to not scare or scowl, and most of the time it’s possible to preserve the dog’s personal space just by avoiding people.  We can cross a street, take a wide arc across a lawn, or even turn around and walk the other way. But sometimes folks don’t get the message.  I was walking Sam the other day (which is to say that I was restraining him as he went bounding around) when we came upon an old man walking his own old dog. The street was too busy to cross and there were no side streets to turn onto, so I tried to go wide and give the man the sidewalk.  But this man was intent on our dogs meeting, and he turned wide to meet us.  I turned to make an arc the other direction, and he turned too. I pointed out the obvious fact that Sam was a little wild, but the man just said, “Meh, they should say hello.” So say hello they did, briefly, standing in someone’s front garden.  It was a quick and incident-free exchange (as most of them surely would be if they were allowed to happen), but I was left with the feeling of defeat, since I was practically cornered by this old man, and all my tricks and policies brushed aside by his inveterate friendliness.  That man has been saying hello for many decades, and was not going to be denied.  We continued walking down a lovely street on a beautiful day.  It was terrible.