Occasionally when I’m walking or petting or even just talking to dogs, I feel a funny little flutter in my stomach.  Sometimes the flutter speaks of happiness and affection for my furry friend, but other times it feels more like a fight-or-flight misfire, sort of an instinctual deja-vu which reminds me that the animals in front of me–the animals I care for–are in fact large carnivorous beasts capable, some of them, of dismembering and devouring me if they were ever in the mood.  You know, that feeling.

There are a few rare dogs that will eat lettuce and baby carrots as treats (Hi Maverick!) but the vast majority hunger only for flesh.  Give your dog a bone and watch as your little cuddle muffin loses himself in the pleasure of the gnaw. Marvel at how easily his jaws break through solid bone.  Now bring this image in to context by picturing the animal that the bone used to belong to laying there next to Cuddles, who has just run down and killed this animal and now sits wagging and chomping away, covered in its blood. Cuddles! you shout, no!  Bad dog, no killing! But Cuddles ignores you; he’s absorbed in the crunch of his huge sharp teeth on the skeleton of his prey.  It’s enough to make you very, very glad Mr. Cuddles is on your team.  The very fact that we tell these predators to come, sit, lay down, etc. and they do what we tell them is truly amazing.  Sometimes I forget this, but then my stomach will flutter a reminder.

Just a couple days ago a four-legged energy ball named Hurley bit a nice neat hole in my shirt.  He was hopping up and down wanting to play (I’m not sure what game, maybe Lets Hop Up N’ Down®) but he got a little carried away, and carried away about four square inches of fabric covering my belly button.  I was surprised and disappointed, but it could have been worse.  He could have carried off my liver.  Good boy, Hurley, way to not eat my liver.  Now let’s play a new game: Domestication!®

Hurley likes me a lot (thank goodness) and the feeling is mutual, but he’s big and strong and I’m sure he could make my hand not useful to me for a long time, maybe forever, if he should decide to really chomp.  Technically his mouthiness is called a type two bite, and while it doesn’t hurt at all (he does it to express his excitement and affection), it creates a situation in which I want to keep Hurley happy so he doesn’t decide to hurt me. This kind of situation seems to work okay for lion tamers, but it’s less than ideal for pet owners.  Hurley just doesn’t understand the line he is toeing, perhaps because he’s never truly considered crossing it.  He’s like the silly cowboy in the Western who is always swinging his gun around and spinning it on his finger:  Hurley has a dangerous weapon (attached to his face), and he doesn’t get that while it’s kind of fun and thrilling to play with it, the audience is half expecting him or those around him to come to a bad end.  I hope he doesn’t shoot any more holes in my shirt.

Almost every walker I know has been bitten.  It’s never serious, just an inevitable result of close interaction with animals that have boundaries and buttons and limited means of communicating to us where they are.  I was bitten by Callie, and am not special in this regard.  Callie is an ancient Shepherd kind of dog, and in her progress through the decades she has left much patience behind her.  Also, she knows she is beyond reproach.  There are no time-outs for Callie, no scolding her or making her sheepish.  “No,” “bad” and “ow why” mean nothing to her.  Still, on the whole she’s a very sweet dog. When I walk in and squat down, she immediately comes and buries her head in my stomach and does a little happy dance while I rub her back.  Why then did she bite me? It was last winter and we’d just returned from a walk in the snow.  I started wiping her paws (standard practice) and had wiped three and was reaching for the fourth when she decided she’d had enough of that. Chomp.  She didn’t break the skin, but it hurt.  The shock and offense was greater than the pain, and when I told other walkers about it they all said, more or less, “you tried to wipe her paws?!” There was a long-standing memo out, and I missed it.  It was my fault, and I paid.  Callie holds no grudge I’m sure, any more than she seems to hold a grudge against every living thing she sees, as well as a number of non-living objects. And most of them never even thought of trying to wipe her paws. 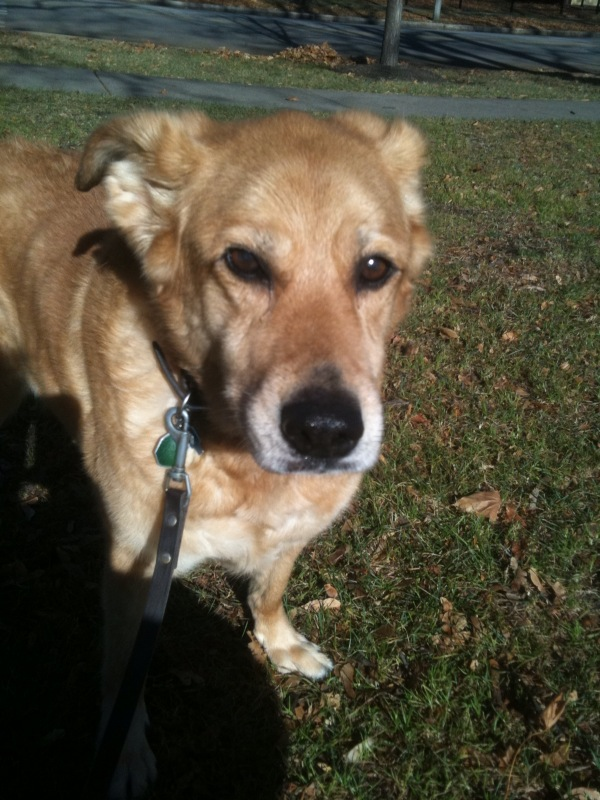 Callie can’t chase squirrels or cars or children, so she chases them with barks as she rumbles down the street.  Lots of dogs love to chase. It’s part of being a recently reformed wolf (about 15,000 years recent).  Many of the dogs I walk go nuts whenever they see a squirrel or rabbit.  Sam and I once saw a family of deer, and he froze like a statue for a solid minute as wolfish neurons spanning eons rapid-fired behind his glassy eyes.  Most of my chase-prone dogs probably wouldn’t know what to do with their quarry if they ever actually caught it.  Mattie probably thinks squirrels squeak like toys.  Morgan would probably be content to just chew, shake and release.  But some dogs, like Hurley, Poncho, Fozzie, and many others, know exactly what to do. If they ever caught a rabbit, there would be blood.  I hold tightly to the leash.  And I never, ever, dress like a rabbit.

Some cats are very sweet and fun to be with, but generally it seems to me that cats are well-behaved because he/she finds it to be in their interest, not because they have any special affinity for humans.  Basically, I think of cats as just shrunken tigers:  magically turn the average house cat back to tiger size, and sooner or later he’ll eat you.  I played with a bunch of young kittens once, and every one of them alternated between nuzzling and trying with all their might to kill me.  The fact that they couldn’t made it cute.  Play with puppies and you might get nipped or lightly chewed on, but the pup won’t try to make you dinner.  If a grown house cat scratches or bites, it can hurt a lot, even cause bleeding or leave a scar.  But a grown dog can cause much more serious injuries.  A cat biting is annoying.  A dog biting is dangerous.  Yet somehow, and much to our doggies credit, it’s easier to take for granted that dogs like and obey us.  Still, I think it’s worth remembering from time to time, in the pit of your stomach, just who it is we have sleeping in our homes. Tell Cuddles he’s a good boy for not eating you, and give him a bone.