While we tremendously appreciated every little bit of help Hannah brought to our team, she will be returning back to school this Fall! Thank you, Hannah!

Our newest South Loop Out-U-Go! Pack Leader is currently in training and looking forward to introducing herself! We are so pumped to bring someone to our team that will help provide more support in our office to our Pet Parents and staff. We are working towards making your OUG! experience better in South Loop and Hyde Park, and this is just one of the ways we plan to do it!

And as always, thank you, Pet Parents, for being so fantastic to our team! We are so lucky to have you, too!

Buddi is an English Bulldog. 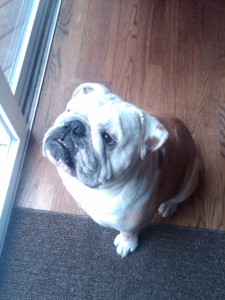 Orecchio is a French Bulldog. 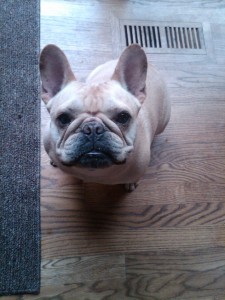 Sometimes the two of them like to re-enact the 100 Years War, and it’s times like that which make me grateful that Bulldogs’ canine teeth are recessed into their tiny snouts, or else it would be too true a re-enactment, with blood and carnage spread out across the globe.  Instead, they just sort of wrestle each other and snarl and try to bite but usually after a few moments of furry fury get so exhausted that they just retreat to opposite corners of the room and vomit.  You can ask a historian how well this performance symbolizes the 100 Years War.  All I know is I don’t like watching it, yet dare not venture a hand to pull them apart, lest it be returned to me a stump.  Also, if I pull one away and restrain him, the other seizes the opportunity to get some cheap shots.  No one is ever really hurt and there isn’t always a clear winner, so I bite my lip and let them fight it out.  At least, I used to. They haven’t fought in weeks.  It might have something to do with hormone changes in Buddi, who was neutered several month ago.  Possible.  But I’d rather take the credit for fostering a comfortable environment where neither dogs feels the need to vie for position in the pack.  It hasn’t been easy, but slowly, they are turning into teddy bears.

Buddi is about 50 lbs and very powerful.  He is also, to quote his human dad, “a huge butthead.”  He is aware of how strong and intimidating he is, and likes to push boundaries.  Orecchio, like many younger siblings, is much more mellow.  When Buddi is acting up by, say, attacking the towel you are using to wipe up wet paw prints, or trying to pick and then win a fight with a nearby hockey stick, Orecchio will sometimes reproach his brother by attacking him.  This is very noble and brave of Orecchio (fine Renaissance gentleman that he is) since Buddi is at least twice his size.  These fights end quickly because Buddi knows he is in the wrong, and like any older sibling who has just been tattled on, he contests the point just a little for decorum’s sake, and then sulks away to plot his revenge.

But the revenge motive is only part of the explanation for their fights.  The greater part has to do with pack dynamics, and the complications that come along with new pack members.  Since I walk Buddi and Orecchio (or Rec as I like to call him) twice a day, I am kind of part of the pack.  The bulldogs are like any dogs in that they instinctively seek the comfort of knowing who is the pack leader.  That can never be me, nor should it be.  If their owner was a petite woman, the boy’s would defer to her like the wonderful and loyal vassals that dogs so often are.  But their human is in fact himself a large and powerful guy, and so the thing I’ll call a mind residing inside Buddi’s “butthead” has an extra overt and satisfying bit of information to put his pack sense to rest:  the knowledge that his owner could kick his butt.  Not that his owner would, because he is in fact a very doting and caring pet parent.  But with Buddi, I just get the sense there is more of a high-school gym-room kind of mentality.  Before I showed up, the pack was clear in his mind:  big monkey thing (his owner) on top, then himself (the Awesome One), then the Frenchman.  Simple.

Then I showed up…