Winter is back.  Chicago may have pretty lousy and erratic weather sometimes, but I’m pretty sure she’s still subject to just the one hibernal season per trip around the sun.  Yeah, I clearly recall a lovely spring and gorgeous autumn, and the parts of summer I remember were totally unforgettable.  It would seem, then, that I have completed a full climactic cycle in the position of pet sitter/dog walker. Climactic cycles, as I understand them, often occur in the course of what we call a “year.”  In other words, I’ve reached my one-year anniversary with Out-U-Go! Let me double check my math.  Yep. It’s time for reflection.  It’s time to take stock. It’s time to gush.

Follow my fuzzy digressive math if you will.  By my estimation, I walk anywhere from a fifth to a half a mile per walk, depending on the dog.  Some dogs are content to stroll leisurely to the corner and back. Josey leaps to mind in this category (the only time she ever leaps). If that big lovable wookie and I manage to make it around the block, it means she’s feeling particularly athletic.  Cooper the Basset Hound and I have never even made it to the corner, intent as he is on inhaling the whole world through his enormous nostrils.  On the other end of the spectrum sit Morgan and Barley, who would be remiss if they didn’t walk as fast as they possible could at every moment of our walk.  Those gals and I can dash around three city blocks, which I guesstimate is about half a mile.  Then there’s Mattie, who gets extra-long walks because she needs an extra-long time to take care of her business.  She and I must cover a mile at least.  Between these extremes, I’d say most walks go for an average of about a third of a mile.  So given an average of, say, 12 visits per day, let’s assume that I walk about four miles a day.  I’ve taken some time off and I’ve picked up a few extra shifts, so on the whole I’d say I’ve walked five days a week for about 50 weeks.  Five times 50 times 12 should equal the number of walks I’ve done in a year.  It’s a big number.  So big I want to double-check my equation.  Hold on a sec.

Yep, the math is sound, if approximate:  I’ve gone on about 3,000 walks and covered about 1,000 miles (I’ve probably biked 3,000 miles at least.)  I’d like to say I’ve walked 3,000 dogs all the way to Denver, though in actuality I’ve probably walked fewer than one hundred dogs total, and half of those only once or twice.  Of the remaining four dozen or so pups, I reckon I walk about half of those only occasionally, as needed by their pet parents.  Bisou the Shih Tzu, for example, may only get a walk two or three times a month.  Rocky and Rumpus are Fridays only, and Fridays always.  And so on.  In short, the majority of my thousands of walks have been with the same couple dozen characters.  Which means that, as you might expect, I’ve grown pretty darn close to some dogs over the course of climactic cycle number 2011.

I went home for the holidays and got the reception I have come to expect and crave from my own dear doggies.  There was wiggling, crying, flopping, hopping, jealous wrestling, toy bringing and dangerous, uncontrollable wagging.  There were two blurry tails every time I spoke, four loving eyes watching my every movement and eight eager legs following me around wherever I went.  There were the ridiculous attempts to climb slyly into my lap (as if they didn’t each weigh over 50 lbs and know better) and the near hysterics whenever I decided to sit on the ground to wrestle or play.  There were also lots and lots of long walks. The pack was as delightful as always, but I was shocked to discover that my sweet pups, paragons of canine virtue and, like everyone’s dogs, the greatest dogs in the whole world, were actually pretty lousy walkers. They pulled constantly, they tangled their leashes and they didn’t look back at me to see what I wanted or where I intended to go.  The problem is that I haven’t been around to walk them in years.  It occurs to me that over the course of so many miles, my regular dogs and I have developed a perfect symbiosis, with each dog internalizing my pace, patterns and expectations, while I anticipate their doggie needs and desires.  If other walkers fill in for me with my regular pups, they always tell me that they are all sweet and great on leash.  I’m the first to declare that my regular pups are inherently delightful, but looking back on how difficult some of our early walks were, I can’t help but feel I’ve encouraged their good walking manners over the course of our trek to Denver.  Or New Orleans.  Or Boston.  The destination would depend on the dog, and I know just which way to go.

Dogs are creatures of habit, just like people.  Callie surprised me today by leading us around a block we had never circled before, which is remarkably spontaneous behavior for a 15 year-old dog.  I like to mix up the route with some dogs if I think they like the mental stimulation, but I’ve found that most dogs have their territory and prefer to simply patrol and pee on it.  Some dogs cannot bear to depart from their well-worn paths, and I oblige them.  But if one is going to walk a thousand miles in the same part of the same city, one must find ways to keep things interesting.  For a while I looked at cars.  These are poor engines for a train of thought, so I soon switched to admiring houses.  Interesting architecture and historic buildings, even in the home of Frank Lloyd Wright and the Prairie School, are also limited in their ability to house my imagination. The seasons offer amazing entertainment, as do clouds, trees, gardens, squirrels and birds, city sounds and smells, and all the hustle, bustle and goings-on around town.  Nonetheless, I have by now taken up that great Big City custom observed (and duly ignored) all around the world: talking to yourself.  People talk to themselves all the time in Chicago.  They also sing to themselves.  By now I do both, and shamelessly.  Really I’m talking and signing to the dogs, but since they contribute no opinions or harmonies, I’m really reading both parts of the dialogue, so to speak.  If you see me, don’t worry: I’m not crazy.  I’ve just been around this block before.  A couple thousand times. 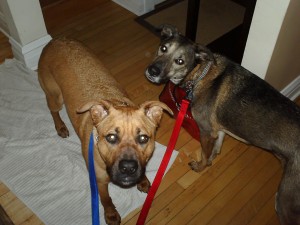 I have the standard walk duration fixed in my internal chronometer, so that I hardly ever need to check my watch to see if we need to speed things up or walk a bit farther.  Over the holidays, however, my chronometer got reset to vacation time.  Today I did the whole standard routine with Morgan and Barley (the same as nearly every day for the last year), then happened to check my watch.  I was shocked to discover I was a couple minutes early. I felt like they probably sensed the routine had changed.  So thorough is our habitualization to each other that I was afraid the pups might have felt unsatisfied.  If they were, I didn’t see it.  I’ll make it up to them tomorrow anyway, just to be sure.

Routine is comfortable, but it’s also dull.  Routine is easy, but it also sucks your time into a place with no memories. I try to keep things fresh.  On the report cards, for example, while I’m sure I haven’t come up with 3,000 different adjectives for the space after the line “after the walk my mood was…” I’m sure I haven’t written “happy” more than twice.  Novelty and spontaneity are out there, just waiting for you to notice them. The weather does its job at keeping us on our toes, and this winter’s uncommon temperance (in contrast to all the warnings that the next few months will be among the coldest and snowiest in Chicago’s history) has everyone pleasantly unsettled. So though I continue to meet and walk new dogs, though I continue to invent new nicknames and happy customs for my regulars, and though my super-regulars and I continue to fine-tune our symbiosis toward walking perfection, I can honestly say every dog is different, every day brings surprises and challenges, and every single walk continues to be interesting in some way.  I’m confident this winter will be easier than the last, since I was then living for the first time in a snowy place, learning to not get lost on my way around a new town, setting my internal chronometer and earning the trust and affection of my furry friends.  But easier does not mean duller.  I’m looking forward to another great year as a dog walker, as I’m looking forward to sharing my stories and adventures on this little blog.

So Happy New Year!  I’m confident 2012 is going to be the most interesting if not the all-around best climactic cycle ever.

Oh and P.S., many thanks to all those pet parents out there, on behalf of all my fellow walkers, for your thoughtful holiday cards.  They were all very much appreciated!