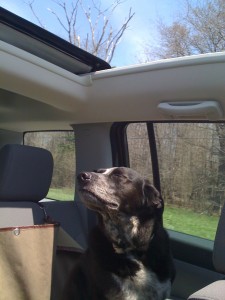 Dog walking is not glorious work. No lives are saved. No progress is made. If I failed to  perform my duties, the world at large would not notice. On the other hand, if I were the greatest dog walker in the world (whatever that means), it wouldn’t count for much in any grand kind of scheme. Political prisoners and refugees would roll their eyes at me doing my professional best; policy makers and art dealers wouldn’t even bother to shrug. When I come home after a day’s walking, hypocrisy remains un-confronted and injustice scurries about free as ever. Rare and wonderful expressions of tropical life are at this moment about to be bulldozed into oblivion, and I do nothing to save them. I didn’t yesterday, and I probably won’t find time for it tomorrow either. For someone who likes to consider their scope wide their imagination fertile and their benevolence robust, a life walking other people’s dogs might seem like kind of a drag. Not so, I declare, and I’ll tell you why.

Dogs are simple creatures. Their needs are few and easily met. Their feelings and concerns are all-consuming (if mercurial), and they don’t hedge in communicating them to us. They live in the present moment just like a fish or a deer or an enlightened spiritual guru, and so they cannot help but be completely sincere always. Everything they do, including sleeping (the thing they do most) is done with the utmost enthusiasm. I think this is why a sad dog is so pathetic: it is a sadness without comprehension but with total conviction, and so it reminds us of bereavement. A sad dog is like a lamp lying on its side: one readily imagines how easy it would be to set it right. And then when a dog is happy again, they are so earnestly happy that they change the whole atmosphere around them, radiating like a lamp with ease and purpose. And this is why I like walking dogs; because I make them happy. True, the happiness of a dog is a relatively small return on a human’s investment of labor, especially if the human is, say, a cancer researcher, peace broker, political activist, etc. But it is an immediate and palpable return. And it is contagious. I can’t always make people happy, since people are, taken as a whole, too complicated and too crazy to even define happiness. But I can almost always make a dog happy. And happy dogs can almost always make people happy, especially if you parade around with them in public so they can display their smiles and smile-shaped tails for all to see.

More than any other dog I’ve walked, Sally has claim to the highly-contended title of “My Favorite.” I left Sally in Oak Park and though I haven’t seen her in months, I wanted to dedicate a special blog to her; because Sally loves me. About the time I began my new big-city route, Sally’s family moved from their apartment to a new house with a nice yard. Coincidence? The running joke was that Sally was my girlfriend and that I would fight anyone else who dared to walk her, even if I was out of town or unavailable. I didn’t actually fight anyone, but I did make sure that every other walker/suitor knew that, though she wagged and smiled for them, she wasn’t really enjoying herself because she likes me and only me. Happiness flooded out of Sally whenever she saw me, from the simultaneous two-stepping of her front and back legs to the making of base camp on my lap. She moved as if possessed by an alien force. And in a way she was. For though she can enjoy nice weather, interesting smells, eating things and all the other little pleasures which are available to any creature, she would never, I think, reach the semi-ecstatic state I witnessed daily without the company of a human. And though I liked to think Sally required my special skills to reach the apex of her joy, she probably also appreciates the company of her owners too (just a bit). Awful nice of those lovely folks to take care of her for me between my visits.

Dogs are our creations and they need us. They like us automatically and resolutely. We are, quite literally, their reason for living. But domestication is a devil deal, for all its comforts and conveniences are alloyed with total ultimate dependence. And dogs, unlike horses or chickens or cats, can’t really hack it in the wild. Besides, they aren’t truly fulfilled unless partnered with the species which created them and then declared them their best friend. Like a boulder sitting on a mountain top, dogs are full of potential energy, (albeit joyous far-out psychic energy) and just need a friendly human to give them a nudge (and a petting) and set them rolling. And Sally got lots of petting. She is one of the softest creatures to have ever existed, rivaled only by newborn arctic foxes and the now-extinct Great Andean Tree Chinchilla. Her fur is so thick that when I stroked my hand from her head to rump, static electricity discharged like arcs of lightening into the room. Sally is smart, well-mannered and eager to please, without ever seeming fawning or undignified. She is wary of other dogs, but only because they remind her that she is one of them, and not the winsome sophisticated human lady that she thinks she is. In fact, if the soul of such a person were to somehow pass through the Twilight Zone and land in the body of a dog, that dog would probably behave just like Sally. And considering all the love and care Sally gets (not to mention the new yard), you could even consider such a reincarnation to be a karmic reward. If I ever become a dog, I hope I have as good a pal as Sally had in me. And I hope I deserve it, even if I never quite cure cancer. 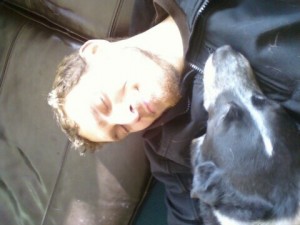 After my last visit with Sally, her owners left me a thoughtful and hilarious gift. All who saw it were jealous. I never got a chance to thank them, though I use it every day. It reminds me of all the fun times with My Girl Sally, and it works as a charm against feelings of superfluidity. In a culture obsessed with achievement, celebrity and clout, one has to argue in defense of a simple, modest lifestyle. I do not yearn for great wealth, don’t pine for power, or desire to join the addicts’ pursuit of the latest status tokens. I don’t even want to be famous (though, embarrassingly, I was on TV: http://www.wciu.com/youandme.php?section=home&assets=videos&assetID=10007938). In short, I am a shining example of my generation’s supposed hedonism, hyper-humanism, narcissism, etc etc. And it’s been working for me, if only for me. Primum non nocere: “First, do no harm.” This is the essence of the old Hippocratic Oath for doctors, and it seems like a good start for anyone. I never got around to aspiring to be a doctor, but I still consider the oath a worthy maxim. But what’s secundo? What comes next? That one’s tougher. I may only figure it out retrospectively, as I look back on my life as an old man. But in the meantime, dogs like Sally allow me to transform every day from an irrelevant laborer into a master alchemist as I turn thoughtless canine boredom into unlimited delight. Every day I usher a little joy into the universe, and with dogs like Sally, all I have to do is walk through the door. It’s glorious.