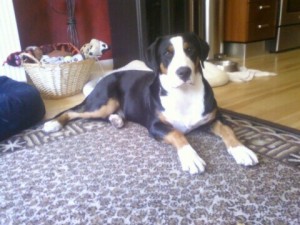 You heard it here first: the Greater Swiss Mountain Dog is the IT breed of the future. I hate that last sentence. It’s probably true, but it implies that a dog is a fashion accessory rather than a real and long-term commitment. Nor do I want to encourage people to seek out exotic pure-bred dogs rather than visiting their local animal shelter. Still, after spending the weekend with a seven month old “Swissie” named Jameson, I’m convinced that she and her kind are too good to remain secret for much longer. Inevitably you will start seeing Swissies all over the place, and with good reason. Let me break it down:

Swissies are very large dogs, similar in build to their Newfoundland or Great Pyrenees cousins. Unlike these jolly beasts, however, Swissies have a relatively short coat of beautiful tri-coloration, with black bodies and heads, white chests and paws and caramel colored legs and cheeks, with two sweet caramel drops over the eyes. They are mellow and proud creatures that are quick to smile, probably a demeanor learned from their original Swiss herders, or Senn, who created them and the three other breeds known as Sennenhund. All four of the Sennehund breeds are remarkably similar in appearance, size being the primary difference between them. The most famous flavor of Sennehund is the Bernese Mountain Dog, which are basically smaller, longer-haired Swissies. The Greater Swiss Mountain Dog, in other words, is in fact the Greatest Swiss Mountain Dog Of All. And they can do it all. Developed, probably, from Roman war dogs brought through the Alps in the first century AD, Swissies were expected to herd, pull carts, guard homes and flocks, hunt, and really just do everything that was asked of them. Their big, deep, scary bark attests to their guard instincts, their love of fetching and order betrays their inner herder, and their incredible strength convinces you they could indeed pull a cart (the title “poor man’s horse” is well deserved). Jameson may only be a puppy, but she already amazed me with her tractor power. Likewise with her big bark. She barked at objects in the house that were new or had somehow changed. A suitcase left in the hall where none had been before, for example, prompted Jameson to bark and growl and look to me for cues on how to deal with the intruder. Since I was particularly unhelpful on the subject (I merely re-stated the obvious question “wuz that Jameson? huh? should we bark at it?”) eventually she determined on her own that the suitcase wasn’t a threat, wasn’t going to be scared off, and could always be killed later if necessary, after a nap.

So these dogs are beautiful, intelligent, loyal, versatile, protective (though sweet) and full of fun quirky personality. What’s the catch? According to their owners, there’s only about 5,000 Swissies in the whole country. Clearly there is a catch. Probably they are prone to health problems, right? Nope! They are relatively trouble-free dogs when it comes health, including the typical bugaboos of big breeds such as hip dysplasia and cancer. They are susceptible to bloat, but this can be prevented easily enough. They also tend to have attacks known as “lick fits,” in which the pups begin to obsessively lick everything around them including the air. While this may sound like an adorable episode of uncontrollable zest for life (or at least taste), lick fits are actually like seizures and, according to Jameson’s doting pet parents, actually rather scary. They are probably the unintended result of some quirky gene combination that comes with having a restricted gene pool for many generations (after all, pure bred=inbred). Jameson did not have any lick fits while I was with her, but the procedure was fairly straight-forward for if she had: calm her with soft words and gentle petting, give her a saltine cracker or a tums if she should swallow too much of the air while licking it. And prepare to get licked. But that’s it!

Otherwise, they are healthy dogs that can expect to have a relatively trouble-free and long life for a big breed. So again: what’s the catch? They can be active dogs and love to frolic and play (and though I try, I can’t over-state how strong they can pull: there’s a video of a Swissie pulling a 5,000 lb. cart) but are also mellow, lazy and often content to flop around for hours on end. They’re good family dogs and good companions, and as generalists, they’re good at just about everything they do. And of course they’re beautiful, with powerful and well-proportioned bodies wrapped up in short, smooth and beautifully colored fur. I couldn’t walk Jameson without being approached by some or all passers-by wanting to pet her or ask me what breed she was and where can they get one. Jameson, being a puppy, was delighted by this attention but Jameson, being a Swissie, also decided on occasion that the approaching person was something to scare off with a big booming “woof!” 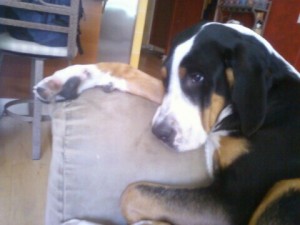 So again, what’s the catch? Why are Swissies still so rare? It could be because they’re expensive dogs, and must be purchased from breeders which are still few and far between. It could be that they’re expensive to feed and deserve plenty of living space. It could be that they need a steady and confident hand to raise them, since they are confident, proud dogs and, as I’ve said, weigh as much as some humans and can tow your Ford. But still. Why are they so rare? After wrestling or playing or napping with Jameson on and off for a weekend, I count myself among the converted. And like anyone who’s in on a thing, I can’t help but be amazed that other people aren’t totally in on my thing.

Adopting is better, always. There are so many reasons why this is so that to list them all here would make all the above talk about Swissies seem like a tangent. And any one of these unstated reasons is reason enough to explain why there aren’t more Swissies in the world. I don’t want to encourage even one person to go to some obscure breeder in Tennessee and drop two grand on an inbred, instead of going to their shelter and falling in love with a critter that needs you and will love and devote itself to you for the rest of his or her days. But still, Jameson is an undeniably wonderful dog. Just as Goldendoodles, Labradoodles and all other kinds of Doodle are wonderful, sweet and lovable pets and are also obscure breeds that are enjoying a vogue, so too will the Greater Swiss Mountain Dog soon start appearing everywhere. Your neighbors will have siblings who have them. Your boss will not stop talking about his new one. You’ll start seeing them everywhere, and you’ll be wary of a fad like any self-respecting person, but inevitably you’ll concede that yeah, those are pretty cool dogs. Where did they come from? How come I never heard of them before now? And why is that one pulling a wagon full of kids and barking at a stump? And then you’ll remember this blog, and go get a Swissie from the shelter.