Summer has come, and it has wrapped us all up in a thick cozy lethargy, like heavy velvet curtains pulled straight out of the dryer and thrown right over our heads.  If you throw a blanket over a dog’s head, they will either run around excitedly until they outrun the
darkness and/or run into something (in the case of most Labs), calmly remove the towel with a deft bite-and-flick (in the case of most Shepherds), or stand there like a tiny senile ghost until someone comes along to help (in the case of most other dogs).  Dogs either
love this game or find it immediately tiresome.  Likewise, people tend to either love the summer, or spend it racing from one air-conditioned space to another, pausing just long enough to express their feelings to anyone within groaning distance.  Summer has turned us all into dogs, in other words.  Dogs with blankets on our heads.  And I love that game. 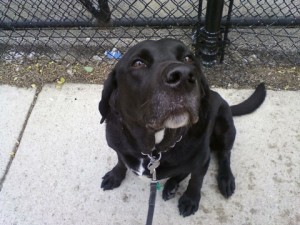 Summer brings out the kid in me.  I wake up early and with a deep urge to go explore things, and after my day’s exploration I tend to postpone bedtime as long as possible (“I don’t WANNA go to bed!”)  I want to eat endless ice cream and drink only the sugary-est of cold bubbly drinks.  I want to frolic in parks, zoos, beaches and everywhere in
between.  Most of all, I crave the feeling, after a long day spent covered in my own sizzling sweat, of suddenly plunging into a pool of deep, cool water.  Some of the dogs I walk share my enthusiasm.  Otis, for example, is always eager to get outside, and is never for a moment daunted by the fact that he is jet black and covered in a thick layer of insulation formed by a few too many doggy treats.  Being a Lab, I’m sure Otis would appreciate a good plunge as much as me.  But alas, he’ll have to make due with a nicely air conditioned home.  That, and a huge water bowl in which I always float ice cubes for him to bob for after our walks. 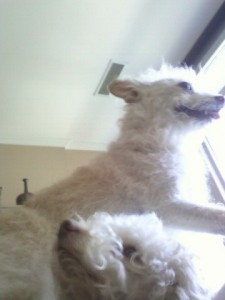 Other dogs are initially as eager as Otis to go for a walk, but the moment I open the door to the street they stop in their tracks and look at me as if to say “you have got to be kidding.”  Cooper is an excellent example.  I’m not saying he’s not tough (he’s not very tough) but he is certainly a dog that appreciates being comfortable. Give him a choice between a rug and a down pillow for his nap, for example, and he’ll not waste time pretending to consider the inferior choice just because he’s a dog.  And the down-side of air conditioning is that it conditions you to a level of comfort which, unfortunately, can’t quite be guaranteed for you once you venture out of your habitat and into what I’ll presume to call the “real world.” And if you’re Cooper, you probably have no notion that the whole world isn’t as pleasant as the 68 degrees that lie over you and your down pillow.  It really is quite a shock to him, poor guy, when I open that door.  Just as it would be a shock if we then returned home to find that all of his favorite soft places were suddenly turned to cinder blocks.  I can’t say why Caleb, his brother and co-cool climate connoisseur, doesn’t react in the same way.  Maybe his bladder is smaller?  Maybe he likes the heat, like me?  Anyway, I sympathize with poor Mr. Cooper. It must be rough having air conditioning (sigh).  I’m sure glad I don’t have to deal with all that sweet, sweet comfort (whine). 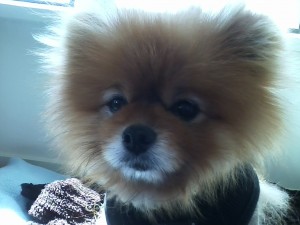 Biggie (as in Biggie Smalls) 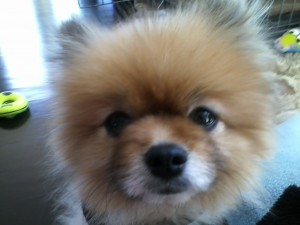 Some dogs, like Torrey, Biggie and Rocco, are actually forbidden to leave the house if it’s too hot, for health and safety reasons.  I can’t say I mind chilling out and playing with them inside for a while, but it seems they’re missing out on the “dog days of summer.”  Aren’t the dog days supposed to evoke images of Bloodhounds on porches afflicted with near-fatal lethargy?  Or dogs that interrupt desperate naps so they can concentrate on panting for a while?  In that case, Cooper might actually be more suited for these dog days after all.  Place him in the traditional “dog days” tableau and he’d find the cool dirt under the deck in no time, while Caleb would be too busy scurrying around like a gleeful idiot (like me) and wasting the good shade.

The term “the dog days of summer,” in case you were wondering, is actually a classical astrological reference to the time of year when the star Sirius is in its ascendency, Sirius being known as the “dog star” for its prominence in the constellation Canis Major (Latin for “Big ole Pooch”).  Sirius is the brightest star in the sky during the months of July and August, and the ancients believed it drove people nuts.  The “dog days of summer” are thus a time when people and animals become a tad feverish and lusty–crazy, in other words.  So if you’ve noticed some disquieting or uncouth behavior (a man walking around with his t-shirt on his head, for example), then I think it’s fair to say the dog days have arrived.  Blame it on that big bright star in the sky.  It’s easier than blaming ourselves and our myopic lifestyles for a changing climate.  But I digress. 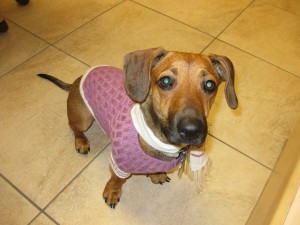 Delilah, in her Winter gear!

No doubt, summer is a nutty time.  Crime rates go up, markets are volatile, and revolutions tend to accelerate their spin.  Yet for every person you see running around like a pinball, cart-wheeling and jumping-jacking in as little flower-print clothing as they can legally wear, there is at least one person (and as many as one hundred) who stagger about glassy-eyed, as if unsure of whether they’re really awake or even alive.  Ever see a zombie movie that takes place in the winter?  Nope.  Think about it.  Summer = maniacs and zombies.  It’s a documented fact.  And it applies to dogs too.  Otis and Caleb have gone a little batty, but even they can’t compare to Delilah the Dachshund.  You’d think that being low to the ground and thus closer to the hot pavement would enervate her just the teensiest bit.  But no, she’s so eager to get out into the heat that she warms up in the
apartment when I arrive by doing a few extra laps around the living room.  She burrows in between cushions to escape the air conditioning, and shows off all the new dance steps she’s been practicing non-stop since I last saw her (Salsa and Meringue, mostly).  She’s decided that Sirius is the new alpha of her celestial pack, and pays homage to him by dragging me around like a sacrificial lamb.  But I am an unfit sacrifice.  For though I love the summer, my heart is not pure:  I happen to love the autumn, spring and winter too.

But summer reigns, and we poor creatures on this mortal heat coil are much abashed.  But what can we do?  The beaches are all standing-room only; city pools are by now mostly urine; the corner ice cream shop just went public on the NYSE, and prices are soaring.  Even the fireflies have begun blinking “SOS” in Morse code.  Seriously.  I’m not making any of this up.  I’m embellishing, sure, but my hyperbole pales compared to the actual facts:  it’s officially the hottest summer on record in the United States.  Over 3,000 local heat records were broken in the month of June alone.  It was the hottest Fourth of July in
Chicago in over 50 years. The warmest average temps ever recorded in a 12-month period (June-to-June).  With such a warm winter and spring, it’s easy to forget that the season is still young.  We still have August to go!  I’ve ruined two t-shirts with perspiration, and torn a third into an impromptu turban (okay so that was me, but Sirius made me do it).  Oh well.  Just remember that by the time we get out from under Sirius’ spell it will be the verge of winter, and we won’t even remember what being “hot” feels like.  Our poor pups will need sweaters and boots again.  We’ll say “come Sirius!”, but he won’t. He’ll be on the other side of the world, seeing how much Australians like playing the blanket game.