What started off as a very sad and all too common situation turned out to be a happy Easter ending. Ms. Lily the Chihuahua was given up at 10 years of age when her family decided they no longer had time for her. Fortunately for this sweet little girl, the Naperville Area Humane Society took her, giving her new mom and dad the chance to fall in love with her.

Ms. Lily was named for the Easter holiday she was adopted on, and she is now ready for the next phase of her life enjoying endless loving care and (hooray!) daily visits from her adoring nannies at Out-U-Go!

Big hugs to you Lily, Janice, and Darryl…we are so happy for you all!

Hi there, I’m Liz, pet sitter extraordinaire covering Downers Grove! I’d like to introduce you to my furry family. I have a 7 year-old Chihuahua named Bigsby, who we call Bigs for short, a 4 year-old Yorki-Poo named Ella, and last but not least, there is my 9-month-old American Bulldog named Cooper.

Every day is an adventure with these three! My bulldog would definitely be the most social of the gang…we spend a lot of time at the dog park playing, running, and saying hi to every potential furry or human friend he sees.

As a joint decision, my furry family and I would declare the classic red Kong as our favorite toy! Each of my pups has their own size-appropriate Kong, and they go to town when I put their favorite snacks inside, like peanut butter, apple sauce, and pumpkin. Sometimes I freeze the filled Kong to make it last longer (shhhh… don’t tell them that!).

My pups also agree on having a favorite treat: they go absolutely bananas for Stella & Chewy’s Carnivore Crunch! We like to go back & forth between and try all the other flavors, too.

As cheesy at it may sound, the best gift I’ve ever received are my dogs! Their unconditional love is something that can never be replaced.

Thanks for taking the time to get to know me and my furbabies! 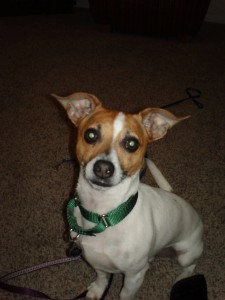 I didn’t used to like little dogs.  In fact I thought they were obnoxious, pathetic and even difficult to regard as real dogs.  I said things like “I can’t respect a dog that couldn’t kill me,” and considered wrestling as an essential touchstone of canine quality.  I thought that the more a dog resembled a wolf the better. Miniature sounded like a derogatory term for any breed.  I even admit to wondering on occasion just how far one could punt a yapping Chihuahua, given optimal weather conditions.  I confess this all now with contrition.  I was a blind fool.

It took a mighty pack of adorable advocates to sway me. Annie, Abigale, Bisou, Jack, Chet, Bobbi, Nala and others have all shown me that little dogs got it where it counts.  In fact, since most shepherd dogs don’t herd sheep, most bulldogs don’t fight bulls, and the fast majority of pointers and spaniels will never hunt any game more dangerous than a squeaky toy, we may as well recognize that we keep dogs in our homes for a purpose beyond the original designs of the breed. Above all, those of us who don’t hunt or herd have dogs around specifically for their companionship.  And in that sense, little dogs are further along on the path toward the domestic ideal, co-evolving with us before our eyes into the splendid urbanites of the future.  And it’s not just that they fit well in apartments and homes surrounded by cityscape, that they live a long time, eat relatively little and make only tiny, inoffensive poops.  I’ve most come to admire how unadorned they are.  Bisou with her sparkly collar only embodies cuteness and adorability with the utmost efficiency.  Who needs a lab’s webbed feet?  Not Annie.  She can float like a teddy bear.   Where is the herd of sheep that is going to escape if Abigale isn’t equipped to drive them back home?  What does the earth stand to gain by drawing up massive wagging tails to coffee table height? You won’t catch pheasants or ducks if you take Bobbi hunting, but you will capture the hearts of everyone you meet.  And so what if Jack won’t scare off any burglars.  He won’t bite their ankles as they carry out the TV, but he will look sad and cute enough to make the burglars stop what they’re doing, put the TV back and go home to reconsider their ways. 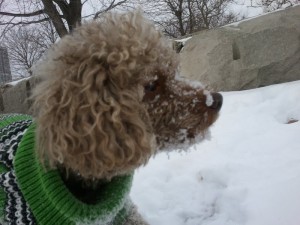 My new fondness for little dogs started as professional courtesy, with me being nice and friendly and fun with the pups because it’s my job. Dogs, no doubt, could sense my misgivings, and may have treated me with the same detached formality.  I didn’t look forward to walking the little guys like I did the big boys. With them, I always knew we were pals.  With the little dogs, however, there often seemed an oppressive mutual decorum, if not open hostility.  Maverick, for example, used to bite my shoe as I walked out the door.  Once the bulk of me was safely behind a pane of wood and only my foot stuck back to keep him from running out into the street, he figured the odds were even and he could finally tell me how he really felt.  This was actually pretty painful, but I confess it hurt my feelings more than my foot (though I never let on to either).  What had I, or my foot, done to offend?

Abigale never bit me, but she did require a lot of patience at first.  When she was adopted, rescued from unfortunate circumstances, she was terribly timid and nervous.  She would spend nearly half of every visit running to hide under various couches, listening to me try to coax her to come near enough to let me put a harness on her.  For weeks she would only inch toward a treat, and then grab it and scram to the nearest defensible space.  I never held it against her for being so afraid, because I would probably react the same way if a 100 foot-tall ogre came into my home carrying a rope, regardless of how he baby talked. Little by little over months, this ogre has almost completely persuaded little Abigale that he’s not only harmless, but fun and friendly and generous with treats.  And in trying to win her over, I’ve been won over as well.  How could anyone be displeased with an animal that looks like she was sculpted out of cotton candy, and acts like friendship and joy are her only operative instincts?  She delights in people, and delights them wherever she goes (hurray for an adoption success story!). We leave a wake of smiles wherever we walk, and I’m as proud to walk that happy pup as I am to walk the statelier beasts.  So what if she can’t wrestle. 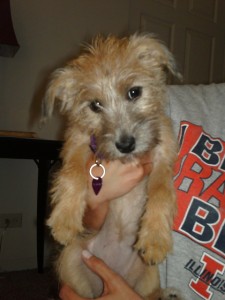 But some little dogs can wrestle.  Some can even pin 100 foot ogres and reduce them to wiggling, giggling fools. Bobbi did this to me.  She is a chihuahua schnauzer mix, which is all I knew of her as I put the key in her front door for the first time, and I did not then consider this information to be much in her favor. But oh, what a wonderful little creature she is!  While her brother Chet (another unlikely mix of little breeds) regarded me dubiously from his crate and refused to come out, little Bobbi pounced with ferocious affection.  To demonstrate to Chet that I was a friendly ogre, I tried a little dog body language, and lay on my back in the living room.  Chet was not impressed, but Bobbi hopped right on my chest and proceeded to try and lick every part of my face and neck.  I was vanquished, along with any little dog antipathy.  Imagine coming home every evening to a friend whose little body can’t contain all the huge happy emotions the very sight of you inspires, and having those emotions pore over you in unabashed animal glee.  Little dogs indeed.

Chet, however, never did come out of his crate, at least while I was around.  Little dogs still have big teeth, and I wasn’t about to try and pull Chet out of his safe place, in case he had some Badger in his lineage.  Bobbi and I walked alone while leaving Chet free to roam the house, go on a pee pad, have a drink, and maybe enjoy some me time.  When Bobbi and I got back, Chet had scorned the pee pad for the living room carpet and gone upstairs to hide under the sectional sofa.  Though I spent the first 15 minutes of the visit enraptured with Bobbi, I spent the next 45 minutes herding Chet from one hiding place to another, up and down stairs more times than I care to admit, and wondering (often out loud) if I was being punished for something.  Eventually I took it upon myself to rearrange some furniture to block off certain avenues of escape, and finally check-mated Chet into a situation where he either go back into the crate or approach and try and get by me.  I’m glad he chose the crate or else I might still be there, locked in a battle of wits with 10 pound dog. The outcome was never certain, and even in my moment of triumph I was still left with a lot of misplaced furniture to move. Little dogs indeed.

I don’t walk those two anymore.  Less ogre-ish walkers get all the Bobbi kisses, and Chet kisses too for all I know.  I’ve largely demolished the prejudice I had for microdogs, but I can’t help it if some choose not to meet me half way.  Granted half way is one step for me and about five for them, but there isn’t always time to work out an understanding between walker and walked.  There are trees to be marked and squirrels to be barked at, and I’ll gladly stand aside and let someone else get the little job done.  I’m gratified by my new little friendships, especially the ones that seemed so unlikely at first, like Abigale.  But it seems 20 minute visits just aren’t enough to win Chet over, and I don’t hold it against him.  Ogres have thick skin.

Ultimately, it was a revelation to me that little dogs are just like other dogs, only little.  They aren’t necessarily like cats for being cat sized.  They’re not puppies either.  They aren’t fragile little toys that can’t be played with, or effete diva dwarfs that survive only on constant pampering. They’re dogs.  Real dogs!  Just shrunken, as if with a ray gun.  Sometimes I’d like to have this ray gun to use on some of my more beastly beasts.  Just to simplify things.

Nonetheless, I still feel vaguely revolted at the sight of a mini canine head sticking out of a purse, or looking over a steering wheel.  But it’s the humans I question, and make me wish again for a shrink ray.  I still think the greatest pet I will never have is a perfectly tame grizzly bear.  I may never get over the dream of riding him around town, letting him humor me with daily wrestling matches, and playing sofa on movie night.  Big dogs offer a glimpse of the ego explosion that comes with familiarity with (and domination over) a powerful predator.  But I can take vicarious pleasure in little Bisou curling up in my arms when I carry her down a mountain of stairs, or Abigale trying oh-so-hard to jump into my second-story lap.  I’m their grizzly bear, and I’m just as tame, and as real, as they are.