Whoops, that was an awesome pet gif.

Seriously though, we think the following gifts are pretty awesome. Don’t fret that it’s too late because…you know…Amazon. 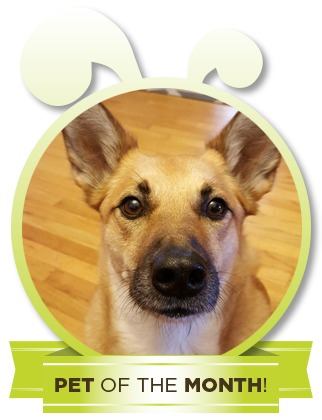 This is Gus. And despite being named after a bad guy (Breaking Bad, anyone?), Mr. Gus is a quiet and gentle pup when it comes to going for a walk and getting treats. His favorite watch post is the couch where he wags to greet you. Once he is out and about, he never wants to go back in! He loves to smell all the smells there are to smell and to get belly rubs!

When you see us out in your neighborhood, you have probably noticed that no matter how much we love movin’ & shakin’ on our walks, we can’t help but stop and sniff the May flowers with your pups. With blossoms in bloom, we get to thinking about how much we love our furry kiddos and all the love they give us back (usually in the form of sloppy kisses and wiggly behinds!).

In honor of this special bond, we’re on Facebook & Twitter celebrating National Pet Month! We’re sharing some surprising benefits that our four-legged family members offer us, in addition to top tips for humans to further better the lives of our beloved furbabies. Get in on the conversation!

Pups of all ages and breeds are invited to a special Easter egg hunt on Saturday, April 19! The event takes place at the dog park at Hammel Woods – DuPage River Access in Shorewood, IL, near Downers Grove!

Your furry friend will have fun sniffing for eggs filled with special prizes or dog treats. Be sure to bring a basket for collecting your findings at Hugs for Hounds!

Let’s be honest. Your furry sweetheart is expecting a pretty grand gesture of love this Valentine’s Day, and who are you to disappoint? This year, show your fur-baby how much you really care. From staying in to hitting the town, we’ve got you covered on ideas for how to spend your special day!

Whichever date you choose, your furry kiddo will be elated to have spent it with you.